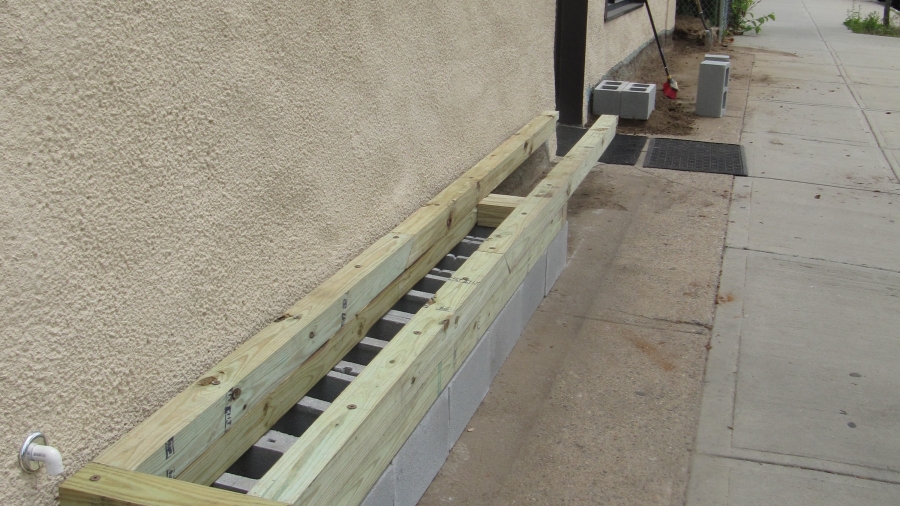 Our new planter beds are in!  Thanks to DownCity Design for amazing work and to Jason P. for helping out with installation and documenting this project through photos and the following story recap!

New planter beds and bench now sit astride Providence Community Acupuncture’s Westminster Street entrance, thanks to a cooperative effort between the Providence POCA member, DownCity Design and their team of middle school aged designers.
Founded in 2009, DownCity is a local non profit’s whose mission to “improve Providence by getting young people involved in designing and building solutions for their community,” is realized through their team-led instructional programs, DownCity architect and lead installer of the PCA project, Max Dehne explained.
The empowerment programs are held at local middle schools where, under the tutelage of DownCity’s staff, the students create, design, then build the public installation project they were tasked to complete.
“We give the kids a project and help talk it out, then show them how to build it,”   Dehne said, explaining how a project starts with request from an outside organization like PCA’s, followed by a brainstorming session which then moves on to the computer aided and real-life modeling phase before any construction begins.
“We do a lot of modeling, then we teach them how to build it using power tools,” he said,
The new instillation on Westminster Street is one of dozens of landscape projects, like the Gladys Potter Park Play Structure and the Providence Public Library Teen Space throughout the city, conceived, designed and constructed by local 10-13 year olds under the auspices of DownCity’s team of architects and graphic designers.
According to their web-site, over 700 students to date have successfully completed their six-week program.
And although scheduling didn’t allow the students who designed it to help installing this particular project, angled cuts and pre-drilled anchor points in the benches wood and concrete block construction showed off the kids’ pre-fabrication skills.
“We want kids to see they can make a difference and help shape their world then give them the architecture and design tools to do it,” Dehne concluded, echoing the mantra of DownCity’s founders Adrienne Gagnon and Manuel Cordero Alvarado.
Cris Monteiro of PCA said, “I’m really excited that it’s a community project. We added an anchor point to the bench allowing the door to be propped open when needed for ADA accessibility.”  She continued, “The best part was meeting with the kids, going over their models,” saying how impressed she was by the students’ level of involvement as evidenced in their thoughtful  questions.

Check out these pictures of the installation of the planters and benches and test out the new bench next time you are at the clinic!  Flowers and plants to come!